“Okay, so, it’s another new year and this time I JUST WANT TO DO IT RIGHT! I feel like every January I organize things and have all these goals of being healthier and more positive and more productive… and then by March I’m back in my same habits again. How do I make actual change that will actually last?!”

Let me tell you a story. Years ago I decided one of my resolutions would be to get back into doing yoga three times/week. Of course, I bought an entire “new year, new me” luxury yoga kit: a Luluemon mat, cute activewear sets, fancy sports bras with the cute criss cross straps, two water bottles, and yoga blocks.  I also got two Groupons for classes at popular studios in LA. I made it to approximately 4 classes before relinquishing yoga time for happy hour and Netflix time, leaving all my new swag–some with the tags still on–to collect dust.

About four months later, my motivation was renewed and I headed to what I thought was an advanced yoga class. I was in the mindset that jumping in at the level I was before I fell off the wagon, despite being way out of practice, and struggling at something that used to be easy for me would definitely get me motivated. I got to the studio, unrolled my lavender mat, framed it with my freshly unwrapped rainbow yoga blocks, and started stretching while waiting for the instructor to arrive. A few minutes later he came in, introduced himself, and thanked us for coming to the beginners flow class. I was pissed.

I wanted a challenge. I hadn’t been a beginner at yoga for eight years, and was definitely not interested in spending 90 minutes learning things I already knew. I was about to quietly pack up and leave when something told me to stay. I’d already made the effort of getting there, what was the harm in easing my way back in with a simple beginners class? I listened, I stayed, and let me tell you, that class kicked my ass. By the end I was exhausted and drenched in sweat. We held every pose for what felt like forever as the instructor walked around making minor adjustments to our form that made a major difference in how many muscles were engaged and how long they could hold out before the shakes set in. He explained that he had us in the poses for so long, and took such care with modifications because he didn’t want us leaving his class with weak foundations. That, he said, cheapens the entirety of your practice for the rest of your life. I was floored.

I left that class feeling so disappointed in myself. How could I have struggled that much in the class for newbies? More than I had in any advanced class in years? What was going on? As much as I wanted to brush the whole thing aside as a fluke, the instructor’s words stuck with me. I already had the answer: I’d been practicing with a weak foundation. Sure, I knew I could go to the advanced classes and complete the sequences, but I also knew that I’d eventually hit a wall with every pose that I couldn’t figure out how to move beyond. That was not for a lack of strength or ability, but simply because there’s only so much that can be built on a weak foundation.

So many of us have rolled into a new year with a mile-long list of resolutions that we are determined to succeed at–never mind that half the list is the same as it was last year; that was the “old us”, and this is the “new us”. All of a sudden we’re going to drink half our weight in water daily, wake up early for jogs, then make the green smoothie that we prepared ahead of time! We’ll also read more books, be more productive, go on more dates, and be nicer to our parents. But really? We won’t. We might try, but inevitably we’ll add yet another year to our history of made and abandoned resolutions and wonder “why do we always do this?” whilst returning to our old habits in defeat.

Here’s the thing: At its core, a resolution is simply a decision made mindfully to do (or not do) something. That’s it. It is one instantaneous item in a much larger overall process. That’s why so many of them go unfulfilled. Resolutions are easy to change, ignore, or give up on (especially if they’re overly optimistic)—plus they’re prone to ambiguity. Goals, on the other hand, are concrete, detailed, driven, and realistic. They have timelines attached for motivation and are much more than a snap decision scribbled on a piece of paper. We have to throw out our lists and see resolutions for the empty unnecessary promises they really are. We have to start a resolution revolution.

After my experience in that yoga class, I decided never to make a resolution again. Instead I’d set goals focused on internal improvement. I started to examine my cracks, identify patterns of behavior, and seek the root cause of my inability to achieve things I set out to do. The evidence all led back to one crucial place: I didn’t have the beginners level skill set needed to turn thoughts, hopes, and aspirations into dreams, then into goals, then actions, and finally achievements. The same is true for so many of us!

What you might need, instead of those detailed lists, is to work on a foundational principle: self-discipline. Without self-discipline you’ll never get to the achievement phase. You can read every self-help book in existence, go on every retreat out there, and still never take a step toward improvement if you don’t realize that somewhere along the way you never learned and strengthened the skills needed to make change occur.

So, to answer your question: “how do I make actual change that will actually last?’” Take the time to examine the cracks in your own foundation, then take what you find and practice! Practice self-discipline, practice self-awareness, practice mindfulness, practice confidence, practice self-sufficiency. Work only on those basic things first and I promise the rest will follow. All that practicing will take a lot of time and motivation, there’s no way around it. Fortunately there’s no lack of musical inspiration to help keep spirits high and minds on track while we work toward self-improvement, so I made you this playlist of some of my favorite songs to listen to on the way to crushing another goal. Play it, make a plan, and get ready for some change that will finally last. 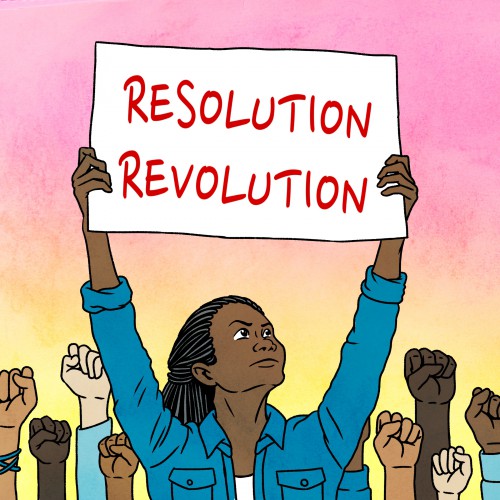 Reneice Charles is a just another queer, liberal, woman of color using the Internet to escape from reality and failing miserably. She received her MSW from New York University and is an Entrepreneur and Vocalist living in Los Angeles. She spends her spare time wishing she didn’t have to use her spare time convincing people that everyone deserves the same basic human rights.