“Hi, I have known I was queer for a while (like… a while. a long while) but haven’t actually come out to anyone until a month ago (to my out gay friend at church camp–different story). The problem is, I have no idea how to tell people. Sometimes I feel like yelling "HEY I ACTUALLY ALSO LIKE GIRLS THANKS” when my roommate walks through the door or talks about guys, but there is always the fear I have that I will be treated differently. What should I do?”

Hey, friend. First and foremost, I just want to say to you that your feelings are completely valid! I remember when my friends would talk about boys or dates to the school dance or celebrity crushes, and I would feel so left out, because I had absolutely nothing to contribute. Believe you me, had I known I was queer back in school, I would absolutely have wanted to jump in and add who I was crushing on.

Okay, now onto your actual question. You have the urge to come out to the people around you, but you’re afraid that people will treat you differently.

I think that if you have the urge to come out, you should absolutely do so. Listen to your gut on this one – and it seems like your gut wants to tell people! I think that people tend to emulate the energy that you give out to them, so that’s a good thing to keep in mind when you take the plunge. For example, if you are just bursting to tell your roommate that you’re also into girls, tell them with all the excitement in your body, and more likely than not they will be excited with you! I mean, don’t just shout “HEY I AM A GAY!” at them as they walk through the door, because that might be confusing…

Personally, I like coming out to people in the chillest way possible. When people talk about their partners, I will casually slip in something about a girl I used to date, or a girl I’ve had a crush on, or a girl I think is cute. Sometimes people raise an eyebrow, so I follow up with, “oh yeah, I’m into girls too,” and then I move on. Because I am completely relaxed about it, usually the people I’m talking to are too. I’ve also come out by having “the conversation”: I sat someone down and I said, “hey, here’s a thing I want you to know about me…” and proceeded to talk to them about my sexuality.

Another thing I’ve learned: the people you come out to sometimes need time to process what you’ve just told them, and giving them the space to do that will be helpful. Maybe your roommate will just take things in stride and immediately begin talk to you about your thoughts on Demi Lovato’s girlfriend – but it is also possible that she will hesitate at first and then find her footing once she has a moment (or a few days) to process.

If the thing you’re most worried about is people treating you differently after you’ve come out to them, well…  the harsh reality is that you have absolutely no control over how other people are going to treat you. Some people are going to be dickheads and make inane comments about lesbians or bisexuality. That’s on them. They need to learn to not do that, or you just don’t need them in your life. Sometimes people are going to ask dumb questions, or make hurtful remarks without thinking twice about it. You may be the first person in their lives to tell them what they’re saying is hurtful. In spite of this, there will also be people who are super supportive of your sexuality. There really is no controlling it.

Since you’ve only told a few people so far, I’d start coming out to the people around you who you trust, and the ones you feel like need to know most–for your own sanity (like your roommate!). I get the feeling that the main reason you want to scream “I AM A GAY!” at your roommate is because you haven’t had the opportunity to talk about your sexuality very often with people. You can start slow and have a few longer conversations with people; don’t feel like you have to cast a wide net when you come out. It’s not a race and it never will be!

Also keep in mind that you can be as out as you want to be. Coming out can mean telling your friends and family about your sexuality. But it can also mean presenting more authentically as yourself (e.g. more androgynous, more feminine, more butch). It can mean writing in your journal about how you’re feeling. It can also mean going to queer-normative spaces like a gay bar, a queer art show, or generally the entire Pacific Northwest (just kidding about the Pacific Northwest… but also maybe not kidding, I hear it’s pretty queer over there).

I’ve got a playlist here of music that my girlfriend help me put together. It’s by mostly queer artists who write about various aspects of queerness and are all out in different degrees. I hope you can take inspiration from them, and feel more agency in your coming out story.

You can be as out as you want to be. 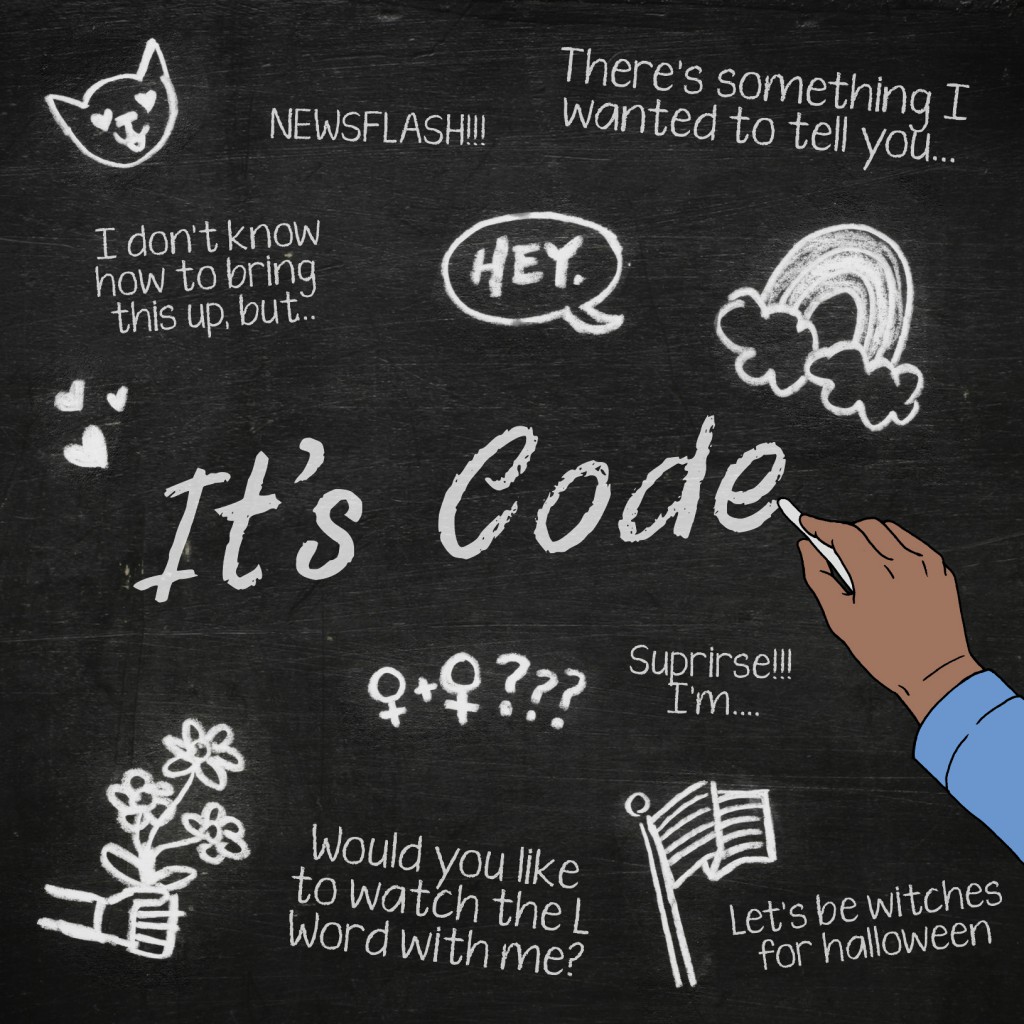 Kathy Tu is the co-host and producer of Nancy, a podcast about the LGBTQ experience today. Prior to Nancy, Kathy worked on The Memory Palace, The Mortified Podcast, Masterpiece Studio, and others. And prior to that she was an EMT and law school grad. It’s been a trip. Kathy’s on twitter @_ktu.

“An Honest Mixtape” is a new advice series here at Everyone Is Gay! Every month we will feature a new guest writer who will tackle one of your advice questions with words *and* music!