How Do I Respond to Biphobic Comments?

My Gay Mom is Biphobic

Can I Call Myself Gay If I'm Actually Bi?

How do i come out to my family as bisexual with actions instead of words because I'm to scared to say it.

1. Rousing family game of Scrabble (you won’t get any points on “I am Bisexual,” but I think they’ll get the point.)

2. Gift them This is a Book for Parents of Gay Kids, cross out “GAY” in sharpie marker and write “BI” and then circle all of the related advice questions inside of the book (spoiler: this is also a book for parents of bi kids). Bonus Points: Wrap it in newspaper clippings about famous bisexuals.

3. Wear this shirt to dinner:

5. Write them a letter. This one doesn’t really have a JOKE component, I just think it is a great way to come out as anything because it gives you the space to say exactly what you want, and gives them the space to digest and process the information. Ya know?!

6. Gather them together for a morning breathing session (it’ll be great, it’ll be grand) where you show them this GIF & explain how calming it can be to the central nervous system:

After they do that a few times, “accidentally” close that GIF to reveal this one:

Then, shrug and shout I AM BISEXUAL and do 16 jumping jacks. It will give you such a great story…

I HOPE THIS HAS HELPED.
You can also check out all theeeeese posts on coming out! Boom.

It’s Bisexual Awareness Week: Here’s A Post Round Up!

From Everyone Is Gay:

Video: I’m Bisexual, and You Can Be Too

From My Kid Is Gay:

Video: Is It Just a Phase?

Have more? Reply with them in the comments!

Well, how about me and my wife, for starters… 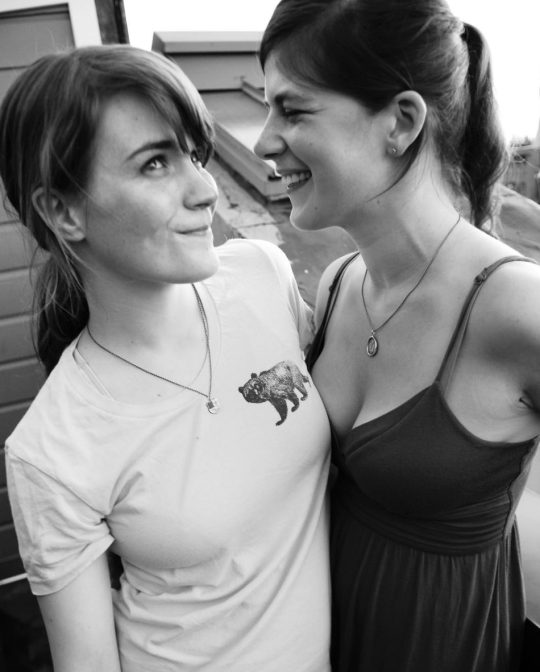 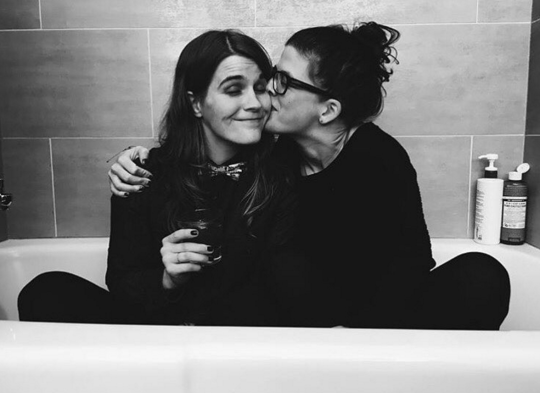 “Hi, I’m a 16yo girl, and recently with all the media storms all over Tumblr, and also just life in general and the people around me, I’ve been thinking a lot about my sexuality. I think I’m at least bisexual, but I keep seeing labels that are wider just, in general, that include trans people? Is there a better label that just ‘bisexual’, is what I’m really asking.”

Hello! I want to say, for the record, that I am thrilled to hear that the world around you has challenged you to think about your sexuality, and to wonder and explore and dig into the feelings you have, both about yourself and toward other humans. I say this because I think there are a lot of people out there who are afraid that, by being open about the existence of many sexualities and genders, we might be confusing or influencing young people to be something that they aren’t. Newsflash! Being open about sexuality and gender allows people to actually think about who they are! Which is great and awesome and wonderful. So. Thank you for allowing me that brief moment on my soapbox.

For starters, the term bisexual does, for many, 100% include trans and nonbinary people! Let’s dig in a little deeper:

When I came to understand the word bisexual I also thought that the term – based on the prefix ‘bi’ – meant that I was saying I was attracted to men and women. I should also mention that it was 1998 when I first used that word to describe myself, and so that is what I meant, because in 1998 I didn’t have any understanding of gender outside of the binary. I knew there were men and I knew there were women, and I felt attractions toward them both! I held onto that understanding of the term for many years (and went on a whole journey with my own labels, which you can hear about here), and over time I learned more about gender identity, the gender binary, and the many genders that exist both within and outside of that (false) structure.

Armed with a new understanding of gender identity, I also realized that I was attracted, like you are, to people of all genders, rather than just the two I’d been taught about as a kid. And, through that whole process of rediscovery, I learned a lot about both the term “pansexual,” and how the term “bisexual” is understood by many (bisexuals included).

Pansexual is a term used by many to mean that they are (like you!) attracted (romantically or sexually) to all genders. If you like that word, then it can be your word, for sure! But but but. You must also understand that the word bisexual is used, by many, to express the very same sentiment. Certainly, there are people who identify as bisexual that may use that term to explain their attraction to two genders, but there are very many who use this term in keeping with Robyn Ochs definition, in which she states:

This is how I understand the identity, and expresses what I mean when I tell someone that I am bisexual. I am attracted to people of all genders.

Now, let’s stop here for a very important second: Words are words. Which is to say that, the way I use a word may carry different meaning then the way that you use a word. The underlying piece of this whole conversation is that, if you are choosing a word or identity label for yourself, YOU have to feel comfortable with that word! It also means that, no matter how many people I talk to, and regardless of the fact that I identify as bisexual myself, that does NOT make me an authority. Words can mean many things to many people! That is why we should always leave room when we hear that someone identifies in a particular way, because their relationship with that word may be different than our own.

My advice to you is: keep asking, keep learning, keep reading. There are a multitude of identities out there, and an endless supply of words to choose from… but at the end of the day your truth will never be contained within just one word. The term bisexual is absolutely inclusive of all genders (many also view the ‘bi’ in bisexual to be an expression of “self” and “other,” meaning they can be attracted to someone of their own gender, as well as someone who is a gender other than their own), and there are many other words, or combinations of words, that can also help you express yourself and your identity.

I hope this helped, or at least confused you enough to keep asking more.

***
Help support our writers and our continued work with as little as $1/month (plus get cool stuff in return) here on Patreon!